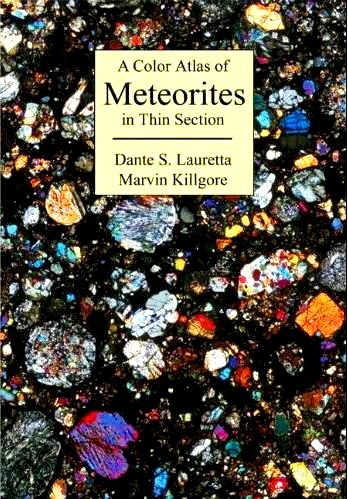 A Color Atlas of Meteorites in Thin Section

“A COLOR ATLAS OF METEORITES IN THIN SECTION” By Dante S. Lauretta and Marvin Killgore, This is the first photographic survey of meteorites in thin sections. Nearly every known stony meteorite type is included. The book is organized by classification and sub-type, from primitive chondrites LL3.0, to planetary achondrites. The first section of the book is dedicated to the ordinary chondrites, followed by the enstatite, carbonaceous, K, and R chondrite classes. The next two sections of the book cover primitive and evolved achondrites. A data block is presented with each meteorite that gives its name, the locality from which it originated, its classification, shock and weathering grades if known, and the source of the thin section photographed. Each classification is presented in six views. The first two are overviews (10mm - 25mm) in cross-polarized and plane-polarized light, followed by four low magnification views with plane-polarized, cross-polarized, reflected-light and BSE (Back Scattered Electron) images. Assumes the reader has a basic knowledge of thin sections and meteorite science. Although each chapter gives the encapsulation of the grouping of the type, a brief description of each of the meteorites chosen to represent the classification is given with brief notations and comments on the selected photographs. “A Color Atlas of Meteorites in Thin Section” is a comprehensive reference for anyone interested in meteorites, mineralogy, or petrology. Published by the Golden Retriever Press, and Southwest Meteorite Press, Arizona, April 2005. The photos are fantastic and I know it is going to be useful for years... - Sara Russell, The Natural History Museum Anyone interested in meteorites and thin sections should have this book on their shelf - Bernd Pauli collector